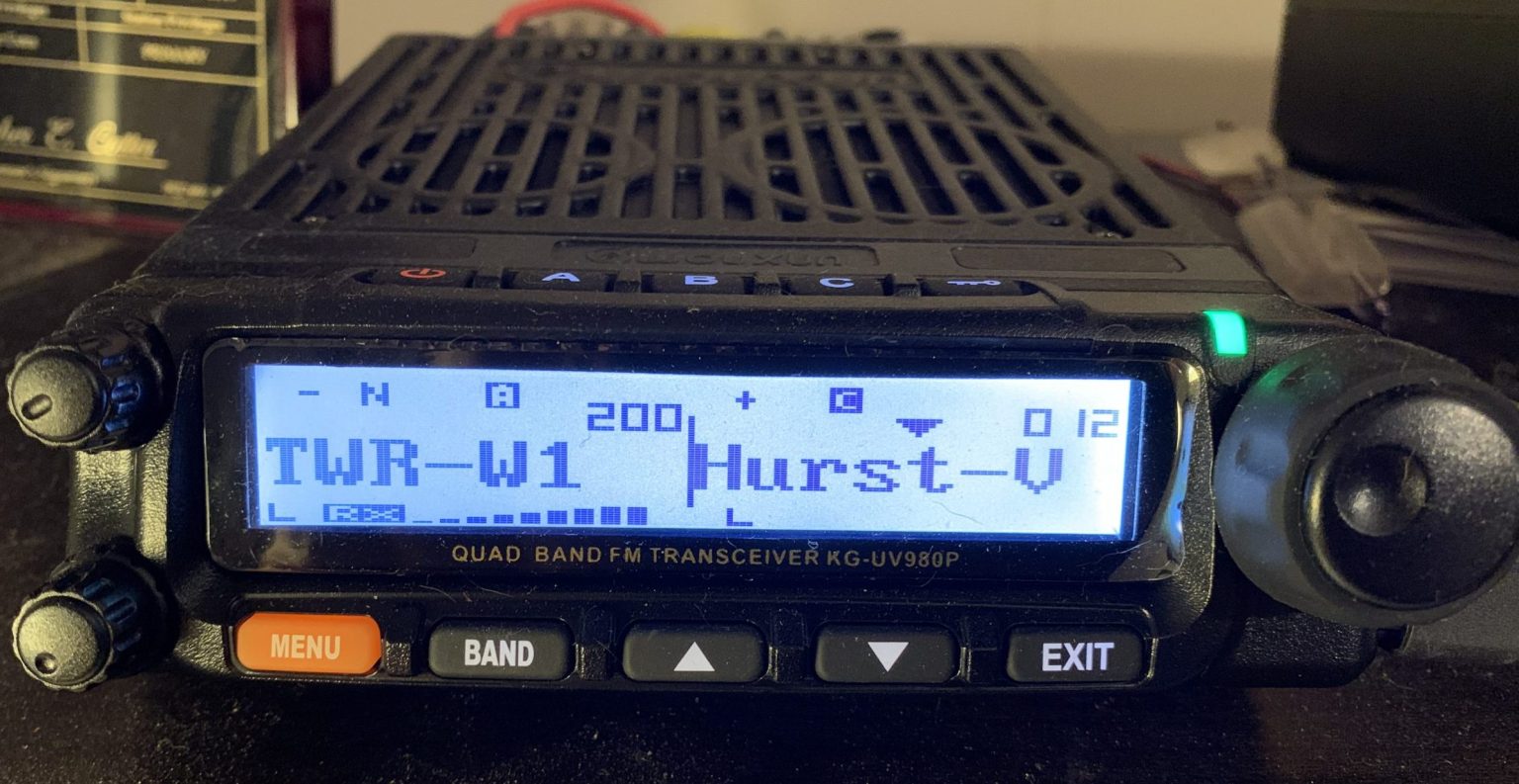 I started my ham career as a Yaesu person because that was the first brand I saw in the HRO catalog in 1999. I continued as a Yaesu person until after moving to Texas years ago when I found an Icom radio on sale and purchased it. I was impressed by the quality improvement and functionality. Eventually, I got into the Kenwood world. I can say this, Kenwood is top-of-the-line. A long story short, I ended up a Kenwood fan, and this is what I wanted as my next FM/AM radio. I have a Kenwood TM-V71a dual-band mobile installed at the house. This was what I wanted for the car also, but… I just had reservations about installing a $450 radio in my car and another $450 just was not in the budget at the time.

After going hard on DMR for the past six years, I have decided to take a break. Nearly every radio I have in my arsenal is DMR capable and I wanted a radio that was strictly FM and could receive AM/Air also. I started looking around and was very surprised at the abysmal selection. The “Big 3” want you to use their digital modes and finding a radio that is not digital is like finding a needle in a haystack. Yaesu has one, Icom has one, and Kenwood has two non-digital radios to choose from. I hate to say it but the Chinese-made radio market is dominating the traditional Big 3 guys.

Eventually, I narrowed it down to two radios, the Kenwood TM-V71a or a Chinese-made Wouxun KG-UV980P. They are both top-quality radios. Wouxun is a Chinese-designed and built radio, and traditional hams will hate it because of that, but the radio is a great piece of equipment. It has dual-superheterodyne receivers, not a radio-on-a-chip, that function independently from each other.

After many hours of comparing and other back-and-forths, I decided on and purchased the 980P, using a coupon code from a YouTuber, the radio came to under $300 with tax and shipping. This also includes the front panel separation kit in the box. I had the buyer’s remorse almost immediately because it wasn’t what I thought I wanted. I just spent a lot of money on a Chinese radio, albeit a high-end Chinese radio, but still, I did not think I was getting that Kenwood quality I wanted.

Let me start with the programming of the radio. If you have spent any time programming radios, you kind of have certain expectations. One of the best programming options out there for programming radio is the Chirp software. Ready to get started, I opened Chirp and looked for the radio in the radio list. Not there. Well dang. I downloaded the software from Wouxun and opened it. Easy enough… I thought. You CAN NOT import CSV files to quickly load the memories, so I started one-by-one entering the repeaters I wanted into the radio. That only took a few minutes. I like to listen to air, rail, MURS, and GMRS. I live near DFW airport so there are a considerable number of aviation frequencies I wanted to program. This took a few hours to get all of the channel memories loaded with everything I wanted. This took approximately three hours to completely get everything in except for rail. There are 97 AAR frequencies and that would have taken a very long time to complete, I’m talking hours and hours more. I uploaded the code plug to the radio and voila, there it was. I always double-check my codeplugs and I found a couple of fat-finger issues that I corrected and uploaded.

Due to us working on some car replacement issues, I had no plans of installing the radio in the car, yet. I boxed the radio back up and waited. It sat there for a week or so and I just wanted to power it on and see what it could do. I disconnected the Kenwood radio and set up the 980p, and I was not disappointed.

My first contact on the radio was on the Hurst repeater where I received excellent audio reports, which was a concern of mine after hearing other Chinese radios on the air. The audio quality was reported great on both a repeater and the Hurst Simplex Net. I am feeling better about my purchase now and the buyer’s remorse is subsiding.

One of my favorite things to listen to is DFW Airport traffic. It is not uncommon for me to have one bank on my radios set to aviation, and the other to ham, Kenwood was no different. I received DFW West Tower 1 usually pretty good along with the air traffic in/outbound. I swapped the cables around and tuned DFW West Tower 1 on the Wouxun radio and BOOM, a received just as good, if not a bit better than the Kenwood. This was a surprise. I love my Kenwood radio, but could it be being beaten on the receiver side. The two radios a very close, but I can hear airborne traffic better on the Wouxun than the Kenwood.

My first opinion of the radio is a great one.

So far everything I have talked about has been from a visual and audio standpoint. Listening with my ears and watching what the radio does on the screen was what I have used to compare. I wanted to make sure I had not heard what I wanted to hear and formed a bias against one or the other. I do not have any specialized testing equipment so I turned to the user manuals. I have no reason to believe they are lying, so here we go. Take a look: 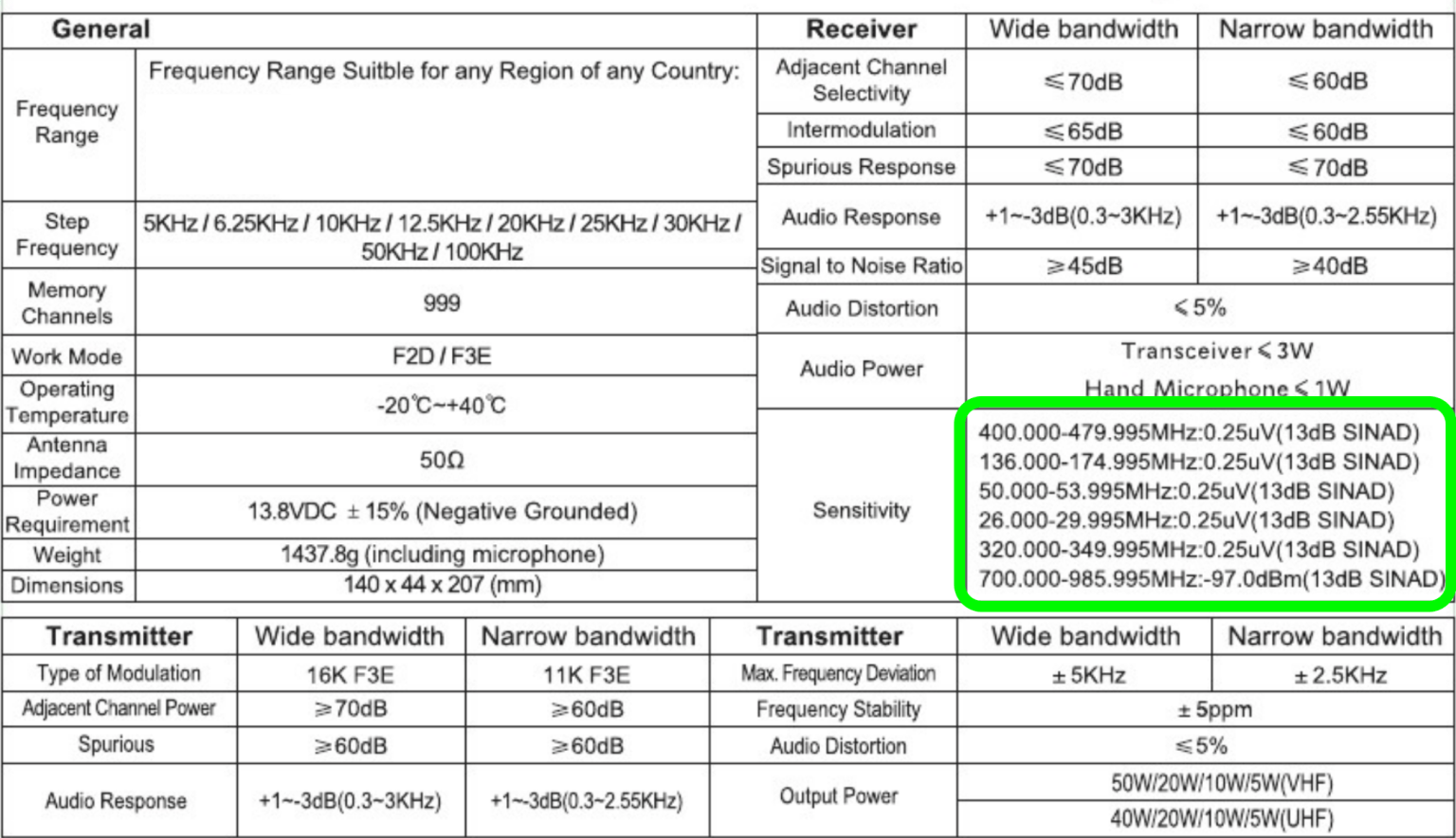 Do you see what I see? The Wouxun has a more sensitive receiver than the Kenwood does. It is more sensitive by 0.07µV. I have had the Kenwood for years, and maybe receiver technology has just advanced. Regardless, I like what I see. At the time of this writing, I have NOT been able to test whether the receiver frontend is easy to overload like the Baofeng and other lower-quality Chinese radios are, or if it stands strong as the Kenwood does. I am kind of suspecting the latter because this radio has surprised me at every turn.

This is an area that separates the Big 3 from the Chinese radios out there. Yaesu’s menus where you have to drill down into menus and submenus sucks. I have always thought that, even when I bought my first radio from them. Icom and Kenwood do a pretty good job with their menus and buttons. They keep it simple and pretty self-explanatory. Wouxun does a fairly decent job too. Some of their menu items have to be deciphered at first to understand what they are. i.e. SNI-SW and SC-REV

The V71a has these functions also, but they call them REM.ID, so poor comparison? Yes, I think so. The one thing I have NEVER seen on a Chinese radio is the Automatic Repeater Offset where the radio knows the + and – offsets for its operating bands. Every Japanese-built radio (Big 3) has this feature built-in as part of the firmware coding, and none of the Chinese build radios have it. This is such a nice feature, but I can live without it.

After a few weeks of use, a lot of scanning, and hosting three nets for two clubs, the radio is a solid performer. There is one little thing that catches me each time I transmit though, the electronic T/R switch is very audible for what it is. It is not loud, but you can hear an audible click when the transceiver is activated. It is nowhere as loud as the click on my former (sold) MD9600 DMR dual-band radio. I find myself using this radio over my Kenwood daily and will probably continue until after I get it installed in the car.

I know there was a lot of comparing of radios from the traditional big guys and the assumed lower quality Chinese radios. A lot of them are junk, but I do believe that Wouxun has differentiated itself as a higher-quality radio manufacturer. I have owned Baofeng, TYT, and other Chinese equipment, and always come to expect them to be junk, as most are. I have heard from many sources that Wouxun is a top-tier provider and I think it is so. I told Carrie, KD5YIZ (XYL) that I would not mind having another one.

I am still a Kenwood fan, and probably will always be one too. I am just saying that currently, they are in good competition with radios from foreign lands now and the competition is tough.

The radio is solid and is a great performer. After three weeks, I am happy to report now that the front end does not overload, just like my Kenwood can resist it.

I like the radio a lot. It is good. I would recommend it to anyone. The menus are good and easy to use after you learn the menu option names. I do wish it had the automatic repeater offset, but that is by no means a disqualifier in my book. I would be happy and confident in recommending this radio and its GMRS brother version the KG-UV1000G which is the same radio with GMRS-specific firmware. Heck of a deal for sure. Good job Wouxun.

This post was written over three weeks just to make sure what I was saying was correct.